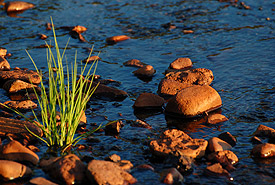 In August 2011 I visited the Wilson Island Archipelago with Nature Conservancy of Canada (NCC) staff Brenda Van Sleeuwen and former NCCer Laura Mousseau, along with Pays Plat First Nation seasonal employees Gary Bouchard and Andrew Wynne. Our goal was to assess vegetation communities, particularly moist forest and inland lake communities that were close to the centre of the 5,000 acre island.

Again and again we walked a very specific transition of habitats, described in the poem below, and after endless marches through the thick spruce/fir forests (which are truly talented at stealing sunglasses right off your face!) we always emerged with a spectacular view as a reward at the end of each adventure. Thanks for taking a walk into the depths of Wilson with me.

Then forest
Mixed at first, with conifers and broad-leaved trees mingling together at the party
Patches of sunlight warm the forest floor

Deeper in, light filters out and dark boughs of spruce and fir draw closely together
They interlock their needled fingers and stand tall to challenge any passer-bys

At last I burst out of the forest's dusk and meet the light
The blue sky
The puffy white clouds
The golden sunshine
And an expanse of indigo inland lake alive with singing birds, splashing fishes and buzzing insects

I watch. I write. I rest.
Then I steel myself for my return journey to the big water
And all that lies between