Winter without central heat: How wildlife on the prairies survives 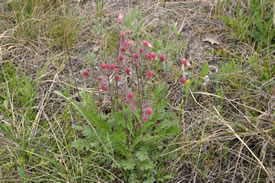 During frigid winter days I find myself marvelling at how wild plants and animals manage to survive the cold temperatures. As my current area of study involves flowering plants and their insect pollinators, these are the organisms that I will focus on in this blog.

Although geothermal energy has recently become a popular way to help heat our homes, plants and insects have been using geothermal heat to stay warm for millions of years. While air temperatures fluctuate quite dramatically over the year (by almost 80 degrees here in Manitoba), the temperature under the ground remains much more constant. Even in winter, the soil temperature typically remains above freezing; the deeper you go, the warmer it gets, at least until you get way up north where the deep permafrost occurs.

Many plants and insect pollinators exploit the warmer temperatures underground by spending the winter there. Perennial forbs simply allow their above-ground parts to die after transferring as much of their sugar and nutrients as they can into the roots, tubers and underground stems for storage. Once spring arrives and it warms up, the plants use their stored food to grow brand new leaves. 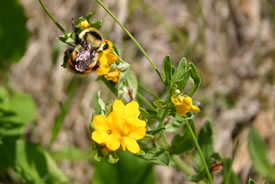 Likewise, many insects will burrow into holes in the earth where they remain inert, living off of stored fat until spring. This is the strategy of many of our wild bees and some flies. However, not all individuals survive the winter. The only bumblebees that survive winter are the queens; all of the drones and workers die. The queens go into hibernation with some of their eggs already fertilized so that they can begin laying them once nectar and pollen from the first spring flowers can be obtained. 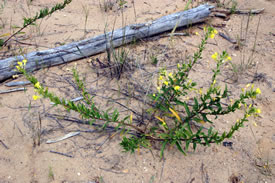 Other plants and pollinating insects deal with winter by entering a much more cold-tolerant stage. Annual plants store all of the energy they produce in the summer in their seeds; the parent plant dies in autumn. Biennials produce a cluster of leaves the first year and then copious seeds in the second year. Most seeds contain concentrated sources of nutrients, protein and sugar; everything that a baby plant needs to grow into a little seedling is there.

Seeds generally have a very low water content, which means that they are less susceptible to freezing damage than actual plant tissues would be. Thus annual plants escape the cold by remaining dormant as seeds underneath a layer of insulating leaf litter and snow. This layer, called the subnivian zone, is also much warmer than the air temperature, typically around zero degrees. 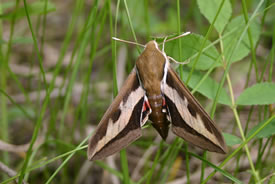 Many pollinating insects, such as flower flies, butterflies and moths survive the winter as eggs, larva or pupa. Regardless of which life stage is overwintering, a sheltered spot near the ground is essential.

Female insects typically lay their eggs inside plants stems or rotting logs, or under thick leaf litter, grass hummocks, rock piles or moss. Eggs are also often coated with foam that contains the natural antifreeze (e.g. glycerol and/or sorbitol) to protect them.

Insects that overwinter as larvae or pupa also typically produce natural antifreeze to lower the freezing point of their tissues so that they can withstand cold temperatures; this strategy is called freeze avoidance. For this strategy to be successful a dry hibernation site is needed; thus a water-repellent coating is required to help keep the insect dry. Alternatively, some insects are able to control where ice crystals form in their bodies so that their cells are not damaged; this strategy is called freeze tolerance. 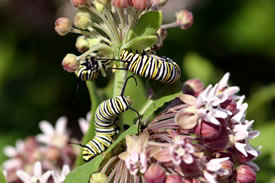 There is only one pollinating Manitoba insect that escapes the cold by running (well flying actually) away from it: monarchs. Monarchs evolved from a group of tropical butterflies. Lacking the mechanisms to tolerate cold weather but benefitting from the abundant milkweeds farther north, the elaborate migratory pattern of the monarchs evolved. Recently I found out that some of the monarchs that hatch in Manitoba spend their winters in Cuba. So I guess humans are not the only ones who are snowbirds!

With this information in mind, you can modify your own gardens to provide winter habitat for pollinating insects. By leaving rotten logs, rock and leaf piles and cut plant stems in your yard over the winter, you are providing habitat where pollinators can safely spend the most frigid months of the year.