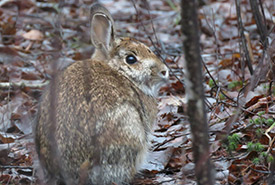 Rabbits are one of the most easily observed species in my suburban neighbourhood. Even during winter here in southern Ontario, you can find hints of their presence. My two young kids gleefully alerted me to a set of eastern cottontail tracks imprinted on freshly fallen snow during a late December storm. The tracks — long, thin ovals arranged in a triangular shape — look like a bunny with long ears in itself!

Along with two species of rabbits, there are also three species of hares native to Canada. Together, rabbits, hares and pikas make up the lagomorph mammalian order, with rabbits and hares sporting characteristically long ears and a short button tail, and strong hind legs. But what makes a hare a hare and rabbit a rabbit? Size! Rabbits are smaller than hares.

Wherever you reside, see if you can recognize these native lagomorphs the next time you head outdoors. You may be surprised to find them closer than you think. 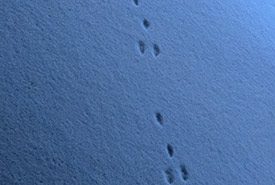 Eastern cottontail tracks in the snow, ON (Photo by Ray Snook, CC BY-NC 4.0)

What my kids and I saw were the tracks of an eastern cottontail: the most widespread native rabbit species in Canada, ranging from Saskatchewan eastward to Quebec, although they are not native to British Columbia and considered an invasive species there.

This species prefers habitat on the fringes of open areas, including fields and meadows, and is well adapted to urbanization. Eastern cottontails’ coat does not change colour in winter. It’s not uncommon to find their shallow ground nests in yards, parks and gardens, as the mother chooses nest sites that best avoid natural predators like raccoons and foxes. Their breeding season can last from February to September, and they can have multiple litters in a year. To avoid attracting predators, the mother leaves the babies (called kits) in the nest for most of the day, returning to feed at dawn and dusk. Eastern cottontails are an important prey species for many native predators too, including hawks, owls, weasels and foxes. 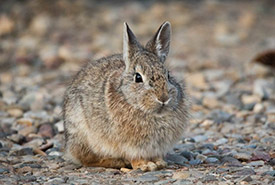 Also called Nuttall’s cottontail, the mountain cottontail is a small rabbit that measures up to just under 40 centimetres long. It has brown mottled fur and its coat does not change colour in the winter, rather it seeks out areas with grass cover to hide from predators. There are two subspecies of mountain cottontail in Canada — the pinetis subspecies is common in southern Alberta and Saskatchewan, and the nuttallii subspecies is found only in British Columbia’s southern Okanagan-Similkameen Valley, near the U.S. border. The Nature Conservancy of Canada (NCC) is protecting habitat in the Okanagan-Similkameen Valley, where this species is known to live. 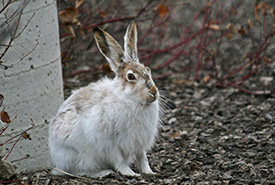 This lagomorph has a confusing title; while its common name is white-tailed jackrabbit, the species is in fact, a hare. This is why it is also known as the prairie hare. The white-tailed jackrabbit has distinctive long, black-tipped ears and long hind legs. They are mainly found in Alberta, Saskatchewan and Manitoba, preferring open, dry fields of southern Prairies and Okanagan Valley. My colleagues in Alberta can attest to seeing them everywhere in urban and suburban areas. In cities like Calgary, they are commonly spotted along roadsides, in parking lots and fields. Adult white-tailed jackrabbits can be 56 to 65 centimetres long, with females slightly bigger than males. 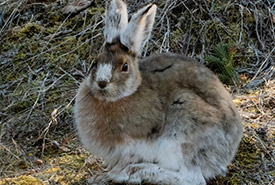 Snowshoe hares can be found in every province and territory in Canada. Their habitat ranges from the Appalachian Mountains to the Rocky and Cascade Mountains, residing in the boreal forest in the north, coniferous forest to the east and deciduous forest in Alberta, Saskatchewan and Manitoba. Snowshoe hares are grey-brown in summer and almost pure white in the middle of winter. Their large, furry hind feet allow them to move effortlessly and quietly over snow, hence the name snowshoe hare. Their ears are also shorter than most hare species. Snowshoe hares are known for their 10-year cyclical population fluctuations. They are an important food source for many predators, such as Canada lynx, great horned owl, coyote and mink. 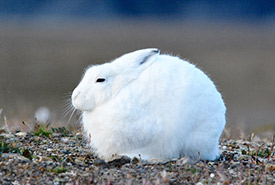 Arctic hares occur in tundra habitat across the country, ranging throughout the Northwest Territories and Nunavut, and the northern reaches of Manitoba, Quebec and Labrador and Newfoundland. An Arctic hare was found to have travelled an astonishing 388 kilometres over 49 days in the Canada’s far north, the longest distance ever recorded for any hare or rabbit. When threatened, Arctic hares can stand on their two hind feet and hop like a kangaroo. They will bolt when they sense danger and can run up to 60 kilometres per hour. A master of camouflage, Arctic hares sport a white coat in winter, which changes to ashy grey-brown in summer to better blend into the rocky tundra.

The Nature Conservancy of Canada protects many of the habitats that support rabbits and hares, which in turn supports many species that rely on them as food.

The next time I will likely see the neighbourhood cottontails might be spring or summer when yard work begins, and we will see if we can outwit each other in claiming the garden crops.