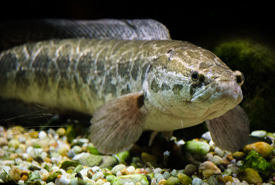 I have an inherent fear of the dark. I’m not ashamed to admit that, without the company of my snoring pug, Molly, taking up half of my bed, I need to sleep with the light on. It’s not so much the darkness that scares me; it’s the overwhelming fear of being blind, unaware of what is in front of me.

That fear is heightened when camping at my favourite spot, Bon Echo Provincial Park; not because of the eerily quiet nights away from civilization, but because of the deep waters beside my tent. Bon Echo features several lakes, but the one that has me spooked is Mazinaw Lake, one of the deepest lakes in Ontario. I may love fish, but swimming in water where I can’t see the bottom always leads my over-active imagination into thinking I’m the next Jaws victim.

But there is one species that may be more frightening than the infamous shark, one that is very much non-fiction: the northern snakehead. Cue the Jaws theme.

The northern snakehead is a predatory fish with native roots in southern and eastern Asia. Unfortunately, the fish has made its way to some American states and has been found (but removed) in BC. The species' introduction is thought to have occurred through the fish’s release into waters from food markets or by people who no longer wanted them as pets. 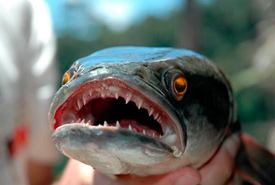 This invasive species is not only wreaking havoc in the water. With a lung-like organ, called a labyrinth organ, enabling them to absorb oxygen, northern snakehead can survive out of water in moist conditions (such as wetlands) for up to four days and permits the fish to thrive in low-oxygen water. The species is also able to move short distances by shimming its body forward.

The adult northern snakehead has no known natural enemies in North America, making it a top predator in Canadian habitats. Its diet consists of fish and their eggs, frogs and toads, small reptiles and even small mammals and birds. Along with the species’ aggressive eating habits and a smile full of long, sharp teeth, this “frakenfish” is a serious invader with the ability to devastate native ecosystems.

Its ability to adapt to various grades of ecosystems, in combination with its vast diet and taste for native species, has conservationists worried. Although an invasion on a scale as large as Asian carp or round goby has yet to occur, the possibility of this species thriving in Ontario waters is extremely high.

In order to combat this invader’s impending attack on Canadian waters, Ontario has prohibited all 28 species of the snakehead under the Invasive Species Act, making it illegal to buy or keep live snakehead as a pet. If you happen to see a northern snakehead in Canadian waters or on land, report your sighting to Ontario’s Invading Species Awareness Program.

There’s only one thing scarier to me than the dark: another invasive fish jeopardizing native species populations and habitats. To make sure this doesn’t happen, let’s turn the light on these invaders and keep ourselves out of the dark about invasive species awareness.