Puttin’ the boots to junk at Shoe Lake 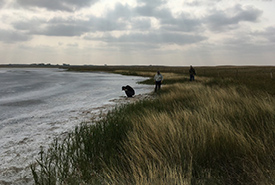 Sometimes the best way to show your appreciation for critters and their habitat is to clean up what us humans have left lying around. That about sums up the purpose of a late-August Conservation Volunteers (CV) event at a Nature Conservancy of Canada (NCC) property called Shoe Lake West. The 522-acre (211-hectare) property is located on the Missouri Coteau, about an hour and a half drive south of Moose Jaw, Saskatchewan. The property and comprises rolling grassland and wetland habitats, and is an attractive location for numerous species of waterfowl and amphibians. Some species at risk found here include bobolink, barn swallow, loggerhead shrike, ferruginous hawk, wood frog and Sprague’s pipit.

The task set out for the seven Conservation Volunteers and two NCC staff was to help clear the property of debris that might be hazardous to wildlife or impede their movement. In this case it meant hauling away old, weathered fence posts and rusty, nasty barbed wire.

As is usually the case with such Conservation Volunteers events, NCC staff had already made a start on improving the property by stringing new fencing and collecting an impressive mound of old wood and wire near an entrance to the property. Part of the plan, explained NCC’s Kayla Burak, who coordinated the event, was to bring along a trailer that would hold all this debris. However, the trailer was in need of repair, so we settled in to walk both sides of a fence line, pulling up fence posts and gathering spools of barbed wire and other debris. Among our finds was a section of (previously) buried telephone cable that had emerged from the side of a small hill. 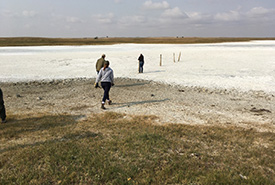 By lunchtime we had filled the beds of two pickup trucks with wood, wire and other bits of debris. After a break we headed further into the property to a large saline pothole, which would normally be a major attraction for water and shore birds. Since it was late summer — and a dry one at that — what we inspected was a dry, white-crusted lake bed. While it didn’t look like much on this day, I’ve seen similar potholes teeming with wildlife and vegetation in spring. All it takes is some autumn rains, a heavy snowmelt, or both.

I’ll be watching for updates from NCC staff as the future of this recently acquired property evolves, and for future CV events so that I can experience it for myself.