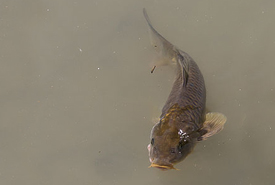 Born and raised in Ontario, I have a hometown pride that carries me throughout the lands and waters of this fine province. This territorial instinct reminds me of the boundaries set by the Greasers in S. E. Hinton’s novel The Outsiders. The “they have their part of town and we have ours” mentality against rival group, the Socs, causes its fair share of problems for Ponyboy and his gang of lovable thugs.

Common carp are the Socs of southern Canadian waters. As an introduced species, they often create a problem for native fish by literally swimming into their natural habitats and wreaking havoc. This dynamic, resembling the rough streets depicted in the novel, puts native fish at a disadvantage due to the large size and rapid population growth of common carp. 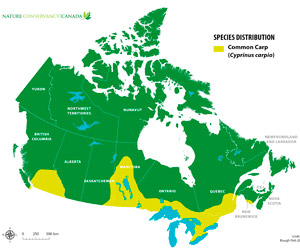 But there are two sides to every story. Perhaps it’s time to take a page from S. E. Hinton and explore this often-misunderstood fish species.

Common carp is a species of minnow originally native to central Asia. Despite its eastern roots, this species has made its home in non-native waters, earning a reputation as the third-most-frequently introduced species worldwide.

This species was first introduced to the United States in the early 1850s. Intended as a new game fish, it took a mere 30 years for common carp to make its way to Canada through tributaries leading into the Great Lakes. Due to deliberate human introduction and its rapid reproduction and adaptation rate, today common carp exists in waters from coast to coast (except Alberta and some Atlantic provinces).

A carp in a china shop

Common carp spawns in shallow and muddy waters in spring and summer. During this period, carp will thrash its body around, causing destruction to wetlands and coastal habitats.

Carp's large size significantly increases the turbidity of waters, creating undesirable conditions for other fish species. This behaviour also damages and uproots aquatic vegetation used by other species for food and shelter.

Similar to common carp, koi (its domesticated counterpart) exists throughout waters in BC and Alberta. Common carp is separate from the grouping of invasive Asian carp, which includes black carp, grass carp, silver carp and bighead carp, which are at the doorstep of the Great Lakes. 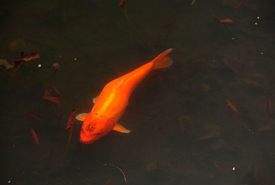 Goldfish in the wild, BC (Photo from Wikimedia Commons)

Although both are considered non-native species, common carp’s story differs from that of Asian carp. Common carp was intentionally introduced to Canada more than 100 years ago, whereas Asian carp snuck its way into our waters without human intent.

Often confused with common carp are fish better known for swimming in bowls than in rivers: goldfish. This fish is  often abandoned by its owners, who release it into ponds, lakes or creeks. Once in wild waters, it tends to gravitate to vegetated areas. Like common carp, it easily adapts to fluctuations in water temperature and quality. 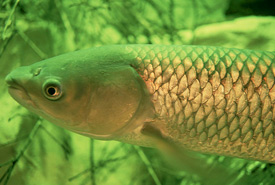 Despite not competing well with some native fish, goldfish still poses a threat by consuming fish eggs and juvenile fish. Like carp, goldfish can also increase water turbidity.

Two sides to every story

The rivalry between the two groups in Hinton’s timeless novel is very similar to that of fish; both humans and fish compete for space, food and shelter. Much like the relationship between human groups, fish species must live in harmony to ensure survival due to similar niches, location and other ecological factors.

While carp are probably here to stay, we can give our native fishes a hand by conserving and restoring freshwater habitats.

But back to Ponyboy and the Socs (spoiler alert). By the end of the novel, Ponyboy develops an understanding that, although they come from two different worlds, the Greasers and Socs are similar in many ways. The moral of this story (and of the common carp)? Things aren't always how they seem. Now I’ve begun to see eye to eye with this misunderstood outsider.