Finding a home in unexpected places 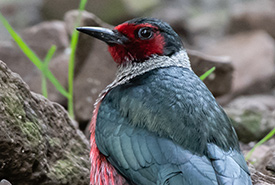 Every May, the piercing mating call of the male Lewis’s woodpecker can be heard in the southern interior of British Columbia. With fewer than 1,000 individuals that migrate to Canada to breed, Lewis’s woodpecker populations are under threat from habitat loss. This at-risk species is considered to be of special concern (Blue-listed) by the BC Conservation Data Centre.

Lewis’s woodpecker is a cavity nester, meaning they make use of large holes in decaying or dead trees as nesting and feeding sites. There are over 70 other species of birds, mammals and amphibians in BC that also rely on rotting old trees to meet their habitat needs. Called wildlife trees by biologists, these trees occur on grasslands, open forests with ponderosa pine or Douglas-fir, as well as on vegetated areas of wetlands and creeks.

Although they’re of great ecological value to the numerous species that depend on them, a wildlife tree is viewed as a useless tree to the timber industry. Today, very few old trees remain in areas where logging has occurred, nor are potential wildlife trees left to grow old and rot into prime habitat for cavity-dwelling wildlife. For species at risk that depend on wildlife trees to nest, their critical habitats in grasslands and open forests are being lost.

How to build a wildlife tree

“With the history of logging at Kootenay River Ranch, trees haven’t been able to get old enough to die naturally and become wildlife trees in the first place,” said Kate MacKenzie, NCC’s stewardship coordinator for the Canadian Rockies region. “We want to actively create new wildlife trees to provide interim habitat while we wait for more trees to age and decay naturally.” 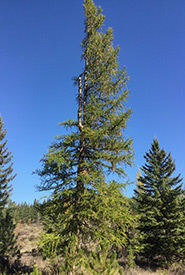 In the province’s Kootenay region, the BC Ministry of Forests, Lands, Natural Resource Operations & Rural Development is creating wildlife trees, many of which are on NCC conservation areas, as potential nests for birds like Lewis’s woodpecker.

The trees are then inoculated with a native species of heart-rot fungus, which accelerates their decay process. Not only does the heart-rot fungus feed on dead wood, but the softened quality of the infected wood also makes it easier for insects to enter inside. This, in turn, attracts birds that excavate the trees to forage for food, creating large cavities. For species that cannot excavate cavities in trees themselves, like Lewis’s woodpecker or northern flying squirrel, these cavities offer high quality and convenient nesting sites. Over a long period of time, diverse cavity shapes that are formed through decay are valuable to a multitude of species, both as nests and sites with rich food sources. These cavities create a hidden biodiverse world in what is often considered to the human eye as “just a dead tree.” 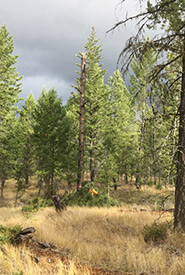 On Kootenay River Ranch, Douglas-fir, western larch and ponderosa pine trees began their transformation into wildlife trees in 2021 as part of this ambitious collaboration between the Province of BC and NCC. In 2018, potential wildlife trees had also been created on other NCC conservation areas in the East Kootenay that serve as critical habitat to at-risk bird species, like on Thunder Hill Ranch, Pine Butte Ranch, Luxor Linkage and Luke Creek Wildlife Corridor.

Meanwhile, as the rot sets in, NCC will monitor the trees for their decaying condition and wildlife activity. If any of these trees does end up housing Lewis’s woodpeckers or any of the 70 other species that depend on wildlife trees, the saying of “in nature, nothing dies” will certainly be true.